Editor’s note — This is an excerpt from a story originally written for Listverse. Parts of it have been reprinted here with the author’s permission.

Arkansas was a hotbed for mob activity in the first half of the 20th century. Al Capone regularly visited the state in the 1920s, spending ample time in Hot Springs betting on horse races at Oaklawn and relaxing in some of the many bathhouses that lined Central Avenue.

Naturally, a state so amiable to mobsters was bound to have a fair amount of shady business deals. That’s where Maud Crawford came in.

A well-known public figure in Camden and a pioneer for women in Arkansas, Crawford worked as a court stenographer before she decided to take the bar exam. Having had no formal legal classes, she aced the exam and eventually became an expert in abstract and title law. At the time of her disappearance, she was even assisting U.S. Sen. John McClellan of Arkansas with a congressional investigation into supposed mob ties with organized labor.

Crawford’s last known whereabouts place her at home. Her husband, Clyde, returned to find her car still in the driveway, the TV on, and money in her purse. Their supposed guard dog wasn’t even fazed. The police began searching for Crawford the next morning, but found few clues for her disappearance. Crawford’s body was never recovered.

In 1986, a series of articles in the Arkansas Gazette by Beth Brickell alleged that Crawford’s disappearance involved then-Arkansas State Police Commissioner Mike Berg. Crawford was looking into a potentially illegal transfer of assets between Berg and some of his family members. Only days before disappearing, she had confronted Berg face-to-face about the issue, Brickell wrote.

Meanwhile, Odis A. Henley, the officer originally assigned to the case, reported to his superiors that evidence he uncovered implicated Berg as Crawford’s killer. This contradicted official statements from the Ouachita County Sheriff’s Office, which said it failed to turn up any clues regarding her disappearance.

Henley’s findings did little to sway the rest of the force, though, and he was reportedly told by his superiors that “there’s too much money involved” before being reassigned. Adding to the intrigue, all of his files on Crawford disappeared after a short trip away from the office.

Legally declared dead by Ouachita County in 1969, Crawford’s death certificate officially lists her demise as the result of “foul play perpetrated by person or persons unknown.” 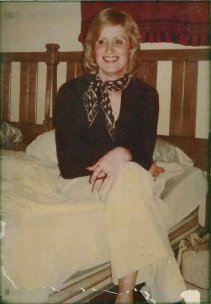 Arkansas in the 1970s wasn’t the most hospitable place for an unwed mother of three. So when Linda Edwards got a job as dispatcher for the Garland County Sheriff’s Office, she considered it a godsend — but just six months after joining the force, she vanished.

Rumors began to circulate that the man she had been having an affair with, Sgt. Thurman Abernathy, had gotten her pregnant. The pair had argued over whether or not to keep the baby — she wanted it; he didn’t.

Their spat escalated past verbal exchanges and Abernathy allegedly killed her. Along with their stormy relationship, further implicating Abernathy in Edwards’ murder was testimony from her friend, Mary Patterson, who told police that Edwards was going to meet Abernathy the night she disappeared.

While the missing person’s case dragged on for nearly a year, things took a frightening turn when a hunter stumbled upon Edwards’ partially buried remains in the woods. After exhuming the body, medical examiners reported that she died from blunt-force trauma to her skull. A few months later, Abernathy was formally charged with her murder.

Arguing that most of the evidence against him was hearsay, Abernathy appealed his case. While the appeal wound its way through the courts, the case was passed along to Dan Harmon, the newly appointed prosecutor for Saline County.

Harmon dropped all charges against Abernathy, who had recently been promoted to lieutenant at the sheriff’s office. The decision to indict Abernathy was left to a grand jury, which cited insufficient evidence for its reason against bringing new charges.

Despite an intense statewide investigation, no tangible evidence has ever surfaced linking Abernathy to Edwards’ murder, and the case remains unsolved.

The Train Deaths (aka the Boys on The Tracks, the Mena Murders)

The murder of Don Henry, left, and Kevin Ives was featured on Unsolved Mysteries in 1988.

The mangled bodies of Henry and Ives were discovered near dawn on Aug. 23, 1987 on a set of railroad tracks in Bryant, a suburb just south of Little Rock.

The train’s engineer saw the boys’ bodies from a distance, but didn’t have enough time to bring the train to a complete stop. He told police they were laying motionless on the tracks, parallel to one another with their arms straight down at their sides, their bodies partially covered by a green tarp.

The initial investigation was swift.

Fahmy Malak, the state medical examiner, ruled Henry and Ives’ deaths accidental. Malak declared that the boys were under the influence of marijuana and tragically had passed out on the tracks. However, the boys’ parents didn’t agree with that conclusion — they were certain their sons died of foul play.

After fighting to get the case reopened, they finally succeed in early 1988. One of the families’ first goals was to get their sons’  bodies exhumed. Their findings where chilling.

Dr. Joseph Burton, an out of state forensic pathologist, examined the remains and concluded both boys had suffered injuries prior to being crushed by the train. Henry’s shirt was in tatters, with lacerations all over his body indicative of stabbing. Ives, meanwhile, had blunt force trauma to his skull. Burton concluded the boys were likely unconscious or dead before being run over by the train. The reported green tarp was never seen again.

The case got stranger. Witnesses came forward with testimony that they’d seen police officers beating Henry and Ives unconscious before tossing them in the back of a truck and speeding off. Others reported seeing a man in military fatigues loitering near the section of tracks where the bodies were discovered. Meanwhile, alleged witnesses with potential information about the murder died in droves.

Speculation about the case was rampant, with many in Bryant wondering if the boys had simply been in the wrong place at the wrong time. Some thought the boys had seen a “drug drop” that was connected to alleged cocaine smuggling via the Mena Airport.

Others insisted that the boys saw a Bryant official — that Dan Harmon fellow we mentioned earlier, to be exact — partaking in a drug deal, and Kevin and Don were simply victims of being potential witnesses that could jeopardize Harmon’s career.

Harmon, who previously had been investigated for drug trafficking, was later arrested on charges for running a drug ring, selling primarily cocaine, from his law office.

The parents did receive some closure for their efforts. A grand jury reversed its original verdict of “probable homicide” to “definite homicide” due to more contradictory evidence.

Arkansans haven’t forgotten the boys on the tracks. Residents honored their memory with a memorial last spring. But after 25 years, it appears that the case will forever remain unsolved.