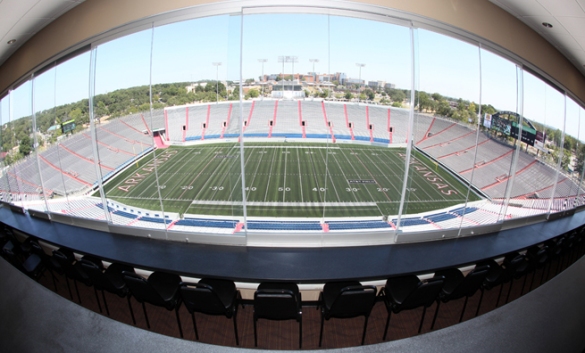 Toledo’s upset of No. 18 Arkansas isn’t the Razorbacks’ only soul-crushing defeat at War Memorial Stadium. There’s plenty of heartache to go around.

Where does the Rockets’ victory rank all-time? Read on to find out.

Billed as the last significant Southeastern Conference game to be played at War Memorial Stadium, Arkansas’ plans for an upset were extinguished in the second quarter.

The Hogs started strong on offense, using a two-headed rushing attack to march 75 yards in about eight minutes for a score. But Georgia’s passing attack answered with a devastating counter-punch. The Bulldogs advanced 74 yards in just 88 seconds to tie the game.

The Razorbacks abandoned the running game and imploded on defense, as Georgia outscored Arkansas 38-0 in the second quarter. Arkansas rallied with four second-half touchdowns but couldn’t overcome its early blunders.

When Arkansas and Texas quarreled in 1959 in Little Rock, it was only the second time in series history that both teams were ranked for their annual showdown.

The game was a slug fest, played mostly on the ground. Arkansas scored first, when Steve Butler caught a 5-yard pass from quarterback Jim Monroe (one of only 10 completions Monroe had all year). The extra-point failed and Arkansas ended the quarter up 6-0.

Early in the second quarter Texas answered after a 14-play drive when Bobby Lackey punched it in from the goal line. The Longhorns booted in the extra point to take a 7-6 lead. Neither team scored again before half time.

Late in the third quarter, Arkansas scored after a 13-play, 89-yard drive. The Hogs tried a two-point conversion, but failed. Arkansas’ 12-7 lead was brief, as Texas scored six seconds into the fourth quarter. The Longhorns attempt at two points also failed, but Texas held on for the 1-point victory.

Arkansas overcame the heart-breaking loss, though, and finished as co-champions of the Southwest Conference alongside Texas and TCU.

Interesting side note: Despite reports of near-perfect weather, Arkansas and Texas combined for 14 fumbles. 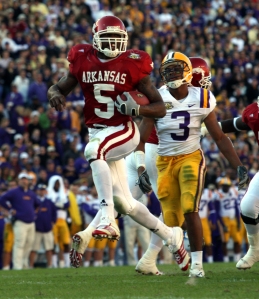 After a tumultuous season that saw indecision at quarterback and friction between Arkansas coach Houston Nutt and offensive coordinator Gus Malzahn, fans were primed for a top 10 Battle for the Golden Boot with national championship implications.

The Razorbacks entered the game 10-1, their last loss coming against No. 6 Southern California in the season opener. But questionable play-calling against LSU plagued the Hogs from the opening snap. Quarterback Casey dick was called on to pass 17 times, and he completed just three attempts.

Trailing 24-12 in the fourth quarter, Arkansas narrowed the gap thanks to a spectacular 80-yard touchdown run from Darren McFadden, in which the Heisman candidate barreled straight through the heart of LSU’s defense. But the Tigers countered with a 92-yard kickoff return from Trindon Holliday that put LSU on top 31-19.

The Hogs scored once more to make it 31-26, then forced the Tigers to punt. But four straight incompletions gave the ball back to LSU.

The Arkansas-Mississippi game, played regularly from 1913-1960, was often more contentious than the annual Arkansas-Texas game.

Both fan bases were rowdy and passionate; so much so that the in 1960, a riot reportedly erupted after the Rebels escaped with a 10-7 victory.

With the game tied in the waning seconds, Ole Miss booted a 39-yard field goal to go up by three. There was just one problem: referee Tommy Bell had called time out due to excessive crowd noise. The field goal was waved off and the Rebels were given a another chance. But the second kick hooked left — allegedly — sailing wide of the goal posts.

Still, Bell signaled that the kick was good. Fights broke out in the stands immediately. After the game, Hogs coach Frank Broyles chided officials and threatened never to play the Rebels again. When the series’ contract expired the following year, Broyles made good on his promise. Although the two schools met in the Sugar Bowl in 1963 and 1970, Arkansas didn’t renew its series with Ole Miss until 1981.

Arkansas won its first three games in 1981, which included a road victory over Ole Miss. But a puzzling loss the following Saturday to TCU in Fort Worth bumped the Hogs out of the top 25.

A showdown in Fayetteville against No. 1 Texas was looming, and Arkansas regrouped to thump Texas Tech before throttling the Longhorns 42-11. It was the Razorbacks’ second-largest victory over their hated rival. Before the game was over, fans stormed the field trying to tear down the goal posts.

Then came the let down.

The following Saturday, the Hogs fell to a .500 Houston team in Little Rock. The three-point loss pushed Arkansas out of contention for the Southwest Conference and stymied a promising season. 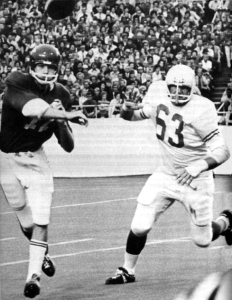 Despite an inexcusable loss to Tulsa early in the season, Arkansas was pumping on all cylinders in the fall of 1971 as it inched towards bowl season. The Hogs were undefeated in conference play and had dominant victories over California and No. 10 Texas, the latter of which came on a rainy afternoon in Little Rock when quarterback Joe Ferguson scored four touchdowns.

After walloping North Texas in Fayetteville, the Hogs traveled to back to Little Rock for a matchup with a sub-.500 Texas A&M squad. The Aggies got the jump on the Hogs, though, beating Arkansas by nine points.

The upset lingered, essentially derailing the season. The following week, Arkansas tied with the lowly Rice Owls. The Hogs rebounded to win their final two SWC games, but still finished second in the conference standings behind Texas.

With coach Bret Bielema entering his third year at Arkansas and looking to build on the momentum from last season, the Arkansas-Toledo game was supposed to be one of three tune-ups before the Hogs started their Southeastern Conference schedule.

The hype train left the station long before kickoff though, as prognosticators predicted a blowout victory for the Razorbacks on their way to — at the very least — competing for the SEC West.

Toledo’s pass-happy offense kept Arkansas off balance, and the Hogs’ sputtering running game didn’t do them any favors. Just one week removed from looking like world-beaters against Texas-El Paso, Arkansas resembled an SEC contender only on paper against Toledo.

Following a stellar 11-2 campaign in 2011, Arkansas fans were giddy with anticipation for 2012. That all changed when coach Bobby Petrino “wrecked” his motorcycle in the offseason — inadvertently revealing his extra-marital affair and illicit hiring practices — and the tone was set for a disastrous season.

Arkansas athletic director Jeff Long hired former Hogs assistant and debt-laden John L. Smith to try and rally the team. After a blowout victory over Jacksonville State in the opener, the Razorbacks still looked like contenders.

But when quarterback Tyler Wilson exited with a concussion against Louisiana-Monroe in week 2, Arkansas’ 28-7 lead evaporated. The Warhawks surged from behind to tie the game with less than a minute left to play in regulation.

Despite starting on offense in overtime, the Hogs were held to a field goal. Louisiana-Monroe answered with a 16-yard touchdown run from quarterback Kolton Browning to seal the upset.

On paper, this game had all the right ingredients for an instant classic. Both teams were undefeated and ranked in the top 10, had national title aspirations and a unique history between coaches. Arkansas’ Ken Hatfield and Miami’s Jimmy Johnson were former Razorbacks and proteges of Frank Broyles.

But instead of ending up as a perennial replay on ESPN Classic, the game was a route. The Hurricanes swept the Hogs off their own field not long after kickoff.

Miami tallied more than 350 yards of offense in the first half and scored five touchdowns in 12 minutes to take a 38-0 lead at half time. The 44-point drubbing was Arkansas’ worst defeat in Little Rock since losing to Tulsa, 63-7, in 1919. 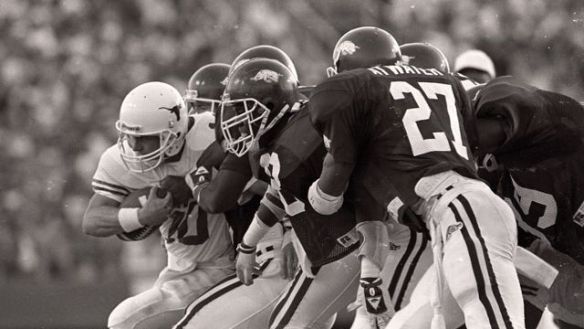 For many Razorbacks fans, nothing tops beating Texas. As Bielema discovered, thumping the Longhorns can provide quite a tingling sensation.

The joy of watching Texas lose is matched only by the sorrow of falling victim to the Longhorns. And in 1987, Texas delivered a knockout punch that still lingers nearly three decades later.

Only two years removed from losing to Texas 15-13 in Fayetteville, No. 15 Arkansas welcomed the Longhorns into War Memorial Stadium with open arms. Despite allowing Texas a first quarter touchdown, Arkansas tallied 14 points in the second quarter to take a 14-7 lead at the half.

The Longhorns held Arkansas scoreless in the third quarter and managed a field goal to pull within four points. In possession of the ball during the waning minutes of the fourth quarter, Texas drove into Arkansas territory on the strength of an 11-play, 56-yard drive.

With four seconds left in regulation and Texas facing a 2nd and 15 from the Arkansas 18-yard line, quarterback Bret Stafford delivered a strike to receiver Toby Jones, who caught the ball in the end zone with no time left on the clock to seal the Longhorns victory.