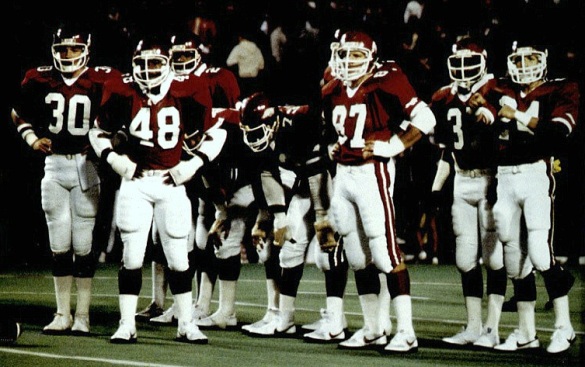 If you missed ESPN’s 30 for 30 special chronicling the rise and fall of Southern Methodist’s football program, then you’re in luck. It’s now available for streaming on Netflix.

One of the series’ more riveting documentaries, Pony Excess focuses on SMU’s sudden resurgence as a national power in the 1970s and 80s, while also probing the program’s shady recruiting tactics. The film pays special attention to the Mustangs 1982 team, which finished 11-0-1 and claimed a piece of the national championship, albeit at a hefty price.

While the filmmakers did a terrific job of weaving a complex tale of corruption into a gripping film, their coverage of the Arkansas-SMU game, a polarizing match-up for both fan bases, was severely lacking. The Hogs were one of only two ranked teams the Mustangs faced in the regular season, and the game matched the conference’s best two teams. A controversial call essentially decided the outcome, forcing the NCAA to change a its pass interference rules. And the outcome effectively set in motion the collapse of the Southwest Conference.

So how could they have devoted so little time to it?

The Mustangs entered the 1982 season as defending Southwest Conference champions. They returned a wealth of talent, too, anchored on offense by two of the nation’s best running backs: Craig James and Eric Dickerson. Meanwhile, Wes Hopkins and Gary Moten headlined a defense that allowed a paltry 11.6 points per game. The SWC was theirs to lose.

Also, understand that back then, winning the SWC was comparable to winning the SEC. The SWC was stacked top to bottom with established programs that played physical, defensive-minded football. Thanks to tie-ins with all the major bowls of the era, if a team made it through the SWC unscathed, they’d likely be playing for a shot at the national title.

As luck would have it, the conference was “down” in ’82. All the Mustangs really had to worry about in terms of adequate competition was Texas and Arkansas. None of the other six SWC teams even finished with winning records.

SMU easily dispatched Texas early in the season, thumping the No. 19 Longhorns in Austin, 30-17. Pony Excess gave that game ample coverage, portraying the Mustangs in an underdog role, as if SMU beating Texas finally meant their program needed to be taken seriously.

The Mustangs followed a win over Texas with blowouts against Texas A&M and Rice, beating the Aggies and Owls by a combined 88-23. Undefeated (9-0) and ranked No. 2 in the country, SMU was scheduled to face a mediocre Texas Tech squad in Lubbock, where the Mustangs hadn’t won since 1968. This had “trap game” written all over it.

Battling to a 24-24 standstill, the Red Raiders appeared to have spoiled SMU’s national title hopes when they tied the game with just 17 seconds left to play. But on the ensuing kickoff, SMU’s Bobby Leach took a lateral from Blaine Smith and sprinted 91 yards for the game winning touchdown.

The miraculous win set up a mammoth showdown between No. 2 SMU (10-0) and No. 9 Arkansas (8-1). The Mustangs could clinch the SWC with a victory. 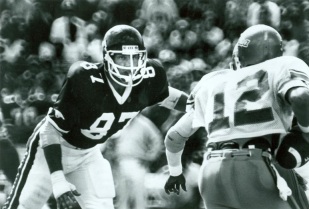 Arkansas was still seething from its loss to SMU in 1981. Adding to the Hogs’ woes, they were were also just two weeks removed from an inexplicable loss to an inferior Baylor squad.

Needless to say, the Razorbacks were fired up heading into Dallas that weekend.

Playing inside a rowdy Texas Stadium, Arkansas scored first, taking a 7-0 lead in the first quarter on a 3-yard run from running back Gary Anderson. Following an SMU turnover, Arkansas had a chance to go up 10-0, but the Mustangs blocked the Hogs field goal attempt.

Riding the momentum, Dickerson scored on a 6-yard run a few plays later to tie the game. Neither team scored again before halftime.

In the third quarter, the Mustangs took a 10-7 lead on Jeff Harrell’s 49-yard field goal. But the Hogs countered with a field goal of their own, as Martin Smith booted in three points from 27 yards out.

Midway through the fourth quarter, still tied at 10, Arkansas put together its best drive of the afternoon. The Hogs marched 77 yards to SMU’s goal line, where Anderson punched it in to give Arkansas a commanding 17-10 lead with just six minutes left in regulation.

The Mustangs regained possession of the ball deep in their own territory. After struggling to gain positive yardage on its first two plays, SMU faced a third-and-long with just over four minutes remaining. Knowing he was short on time, quarterback Lance McIlhenny dropped back and hurled a prayer downfield to receiver Jackie Wilson.

It still hurts to watch.

Nathan Jones, Arkansas’ sophomore defensive back, was actually a few steps ahead of Wilson on the play. Realizing the ball was overthrown (you can actually see it sail past both players at the :40 mark), Jones started to slow down. Wilson, watching the ball, unwittingly ran into Jones, trampling and pulling him to the ground.

Referee Horton Nsersta whistled Jones for the infraction, handing the Mustangs a 40-yard gain. Pass interference was a “spot foul” back in ‘82. Meaning, whichever team benefited from the infraction gained all the yardage accumulated between the line of scrimmage and the location of the penalty.

So instead of SMU being backed up even further on fourth down, the Mustangs were in Arkansas’ red zone with a fresh set of downs.

The rest of the game is sordid history – to Hog fans at least.

SMU scored a few plays later on McIlhenny’s scramble, held Arkansas on defense, and missed a kick in the final seconds to preserve the tie. The 17-17 stalemate clinched the SWC Championship for SMU and secured the Mustangs Cotton Bowl berth.

Like most soul-crushing defeats in Arkansas football history, the Razorbacks followed their game against SMU with another letdown. No. 12 Texas thrashed the Hogs, 33-7, in Austin the following Saturday, and Arkansas fell out of the top 10. The Razorbacks limped to a third-place finish in the SWC.

SMU, meanwhile, had completed its conference schedule by beating Arkansas. The Mustangs went on to upend Dan Marino and the No. 6 Pittsburgh Panthers in the Cotton Bowl in a track meet, 7-3. The bowl victory secured a final No. 2 ranking  for the Mustangs, and the Helms Athletic Foundation awarded them its vote for national champions. An 11-1 Penn State team, widely recognized as the “true” champion of 1982, was awarded the No. 1 ranking by the Associated Press, United Press International and the Football Writers Association of America.

Arkansas found success in the postseason as well. The Hogs knocked off Florida in the Bluebonnet Bowl, 28-24, with Anderson earning MVP honors. To date, it’s the team’s only victory over Florida. The Razorbacks finished the season ranked ninth in the AP poll and No. 8 in the UPI.

In the mid-80s, the NCAA amended its pass interference rules, changing it from a spot foul to a 15-yard penalty. It was the second time since 1964 that Arkansas’ misfortune had been the catalyst for a major rule change.

So then why, after more than 30 years, is Enter the Razorback so torqued up about this game?

Because Pony Excess did a disservice in not adequately covering it. The Hogs were the only top 10 opponent the Mustangs faced in the regular season — how could such an important match-up get such little screen time?

Pony Excess is 102 minutes long, and here’s all the coverage it gave Arkansas-SMU:

“In 1982, the Mustangs dominated the college football landscape. But in the last game of the regular season, new coach Bobby Collins settled for a tie against Arkansas, putting a blemish on an otherwise perfect record.”

That narration was read over about 15 seconds of game footage.

We’re nearly two decades removed from the collapse of the SWC, but one fact still remains when it comes to discussing the Hogs: Arkansas isn’t Texas.

That’s how it went for the Razorbacks for the almost eight decades they spent in the SWC. Arkansas was the only non-Texas school in the conference, and despite being perennial contenders in the three major sports (football, basketball, baseball), the Razorbacks were always considered the stepchild of the SWC.

Glossing over the SMU-Arkansas exemplifies the attitudes and bias held toward the Texas schools in the SWC. Don’t believe us? Here’s what some of the former players said about the tie:

“That team was unstoppable,” said Doug Hollie, SMU’s defensive end. “No one could beat us, and we settled for a tie – that was a slap in the face.”

“I feel like they [the pollsters] really screwed us out of a national championship more than anything. I still believe we were the best team in the country. For sure.”

Arkansas, the tie, the historical context of the SWC, and the game’s ultimate ramifications, were little more than an afterthought in Pony Excess.

The irony is lost on these Hollie and Dickerson. How Hollie thinks the Mustangs were unstoppable, considering that the Razorbacks shut down Pony Express that day in Dallas — and were leading before officials gift-wrapped a 40-yard gain for the Mustangs — remains a mystery to us.

But Dickerson’s gall is the most troubling. How can he fail to see the similarities between the two teams? The Razorbacks’ season was derailed by forces beyond its control, too. But the only mention Arkansas gets from him is when he accused the Hogs of sharing SMU’s slimy recruiting tactics.

After more than 75 years of being overlooked, Arkansas saw the writing on the wall. Razorback administrators were sick of getting the shaft from Texas, sick of SWC officials, and sick of the salacious recruiting. Athletic Director Frank Broyles was  ready to move on. So in 1992, the Hogs bolted for the SEC. It was the beginning of the end for the SWC.

SMU, meanwhile, had its football program dismantled by the NCAA. The ensuing fallout from the pay-for-play scandal, combined with a dwindling lack of competition sans Arkansas, eventually dissolved the entire conference. The SWC officially disbanded in the summer of 1996, after the conclusion of the college baseball season. Founded in 1914, the Southwest Conference of college football’s most prestigious leagues, was dead.

The Mustangs and Hogs will be forever linked by their tie in 1982. If SMU hadn’t beaten Arkansas, the Mustangs likely wouldn’t have won the SWC. That means no Cotton Bowl appearance. And without that, they don’t finish ranked in the top three.

Maybe Arkansas rides that momentum and beats Texas. Then the Hogs have a shot at the Cotton Bowl. Maybe they don’t leave the SWC, adding stability to the conference. Maybe the SWC doesn’t collapse.

We’ll never know what could’ve happened, but at least the complete story is out there. It was about time.