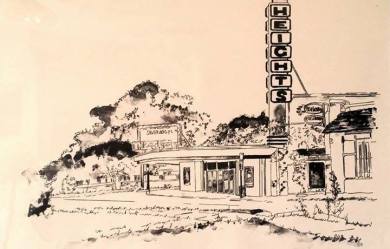 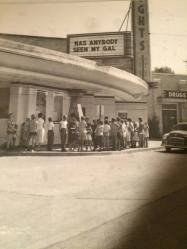 A view of the Heights Theater — looking east on Kavanaugh — in 1952.

A Little Rock Central High student purchases a ticket at the Heights Theater in 1985. Despite having only one screen, the theater was open for nearly 40 years.

The Heights Theater closed in September 1985. Its final film was “The Last Picture Show.” The building has since been remodeled and now houses a bank, botique and restaurant. 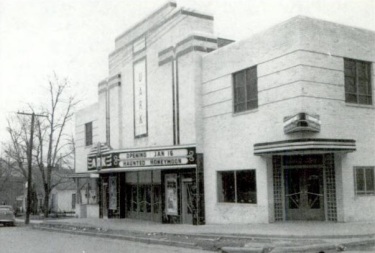 The UARK Theater, circa 1941. The theater, located at 645 Dickson Street in Fayetteville, was the premiere move house for University of Arkansas students in the 1950s and 60s.

“Haunted Honeymoon,” starring Robert Montgomery, was the first film to play at the UARK Theater.

The UARK Theater in 1985. Movies stopped showing at UARK in 1976. By the 1980s, the venue primarily was used to showcase local bands.

The UARK Theater as it looked in winter 2010. The marquee was fully restored in 2014. 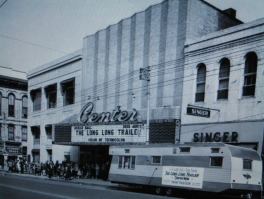 The Center Theater, 407 Main St. in Little Rock, as it looked in 1954. Moviegoers formed a line around the block to see the new Lucille Ball movie, “The Long, Long Trailer.”

An abandoned and deteriorating Center Theater in 1994. The Center opened in the late 1940s and closed in 1977. During the 1950s, the Center was one of eight downtown theaters. 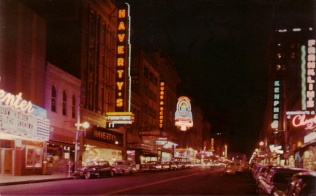 Another angle of the Center (far left) featuring a spectacular view of Main Street.

The Cinema 150’s concession stands not long after the theater closed in May 2003. 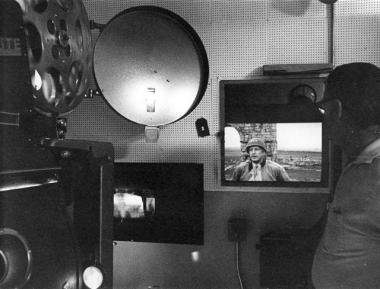 A view from the projection booth at Cinema 150 in 1970. “Patton” is playing in the background.

An exterior shot of Cinema 150 in 1970. The domed theater was located in the Village Shopping Center at the corner of Asher and University avenues. The 150 also was adjacent Casa Bonita, a popular Mexican restaurant.

The Cinema 150 was demolished in January 2015. The building had been used as a concert venue before its demise. 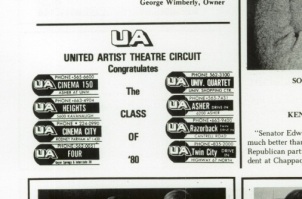 United Artists dominated the Little Rock market, as evidenced by this clipping from the 1980 Little Rock Central High yearbook, The Pix. 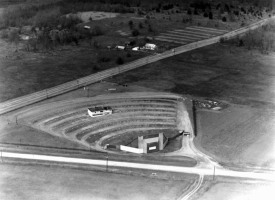 An aerial view of the Starlite Drive-In from 1952. Located along U.S. 62, the original screen was destroyed by a tornado in 1961. It was made of wood due to a steel shortage caused by the Korean War.

The Starlite Drive-In during its final year of operatin 1987. The movies showing that day were “Private Lessons” and “Only When I Laugh.” Today a bank operates at the site. Today, the Kenda Drive-In in Marshall uses the Starlite’s old projection equipment. 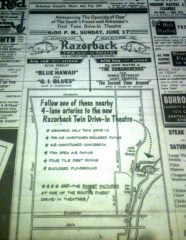 This near full page ad in the June 17, 1962 edition of the Arkansas Gazette announced the grand opening of the “South’s finest and Arkansas’ first twin drive-in theater.”

The Razorback was the premier drive-in for much of the 1960s and 1970s. Both screens were 80-feet by 40-feet. The west screen was dubbed Big Red; the east, Wild Hog.

An exterior shot of the concession stands shows its enormous size. The Razorback held nearly 1,000 cars.

Moviegoers who didn’t want to brave the elements could sit in an air-conditioned auditorium that was just outside the concession stand.

A playground was built adjacent to the screens for youngsters. 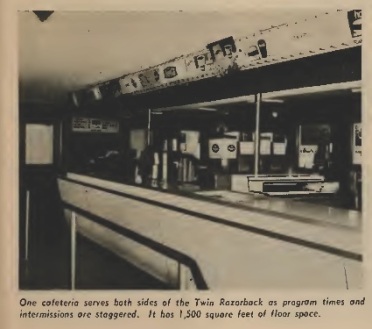 The Razorback’s concession stand served both sides of the drive-in, and featured a robust 1,500 square feet of floor space.

The Razorback’s screens were proudly constructed of “pole, frame and asbestos.” Ick.

A weathered screen of the Razorback Twin sometime in the mid 1970s.

The Zebra Drive-In at S. Blake St. and Neely Dr. S. in Pine Bluff. The date of the picture is unknown, but the drive-in was opened sometime in the 1950s and closed in the mid 1980s. 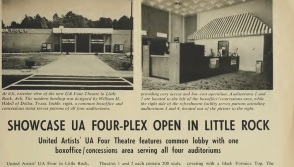 A magazine clipping showcases the new UA Four in Little Rock. The Four, located at on Geyer Springs Rd. near I-34, opened in 1973 and closed in the 1990s.

A regal depciton of the Sevier Theater in DeQueen. The date of the postcard is unknown.

The Spa Theater in Hot Springs as it looked in the 1950s. The theater opened in the early 1930s. It showed movies through the late 1950s.

Another contemporary shot of the Lyric. For more information on current shows, visit http://www.harrisonarkansas.org/c_upe_view.php?id=153.

The New Theater, 112 Main St., was practically in the heart of downtown Little Rock. The theater sat about 890 people and closed in the 1950s. The New’s vertical marquee is on the right of the picture, straight above the second bus.

Built in the 1920s, Gurdon’s Hoo-Hoo Theater, 118 E. Main St., took its name from the International Concatenated Order of Hoo-Hoo, a fraternal and service organization founded in 1892.

Still in operation in 1975, the Hoo-Hoo appears to have been playing “The Dixie Dance Kings” that day, per the marquee.

An undated photo of the Hoo-Hoo shows the theater had seen better days.

Razorback Twin Cinema, later expanded and renamed Razorback 6 Cinema, opened in the 1970s at 2035 N. College Ave. in Fayetteville. The theater closed in 2009 when Malco opened a 16-screen multiplex a few miles west of College Avenue and Joyce Boulevard. The building has been renovated and currently houses a World Gym.

Abbott and Costello star in “Hold That Ghost” at the Skylark Drive-In, 5241 U.S. 67, in Pocahontas. The site of the former drive-in is currently occupied by a flea market. 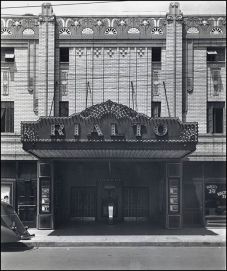 The Rialto Theater, located in downtown North Little Rock, opened in either the 1930s or 1940s. The Rialto was one of six theaters in downtown NLR in the 1950s.

Another view of North Litlte Rock’s Rialto Theater, this time in 1963. 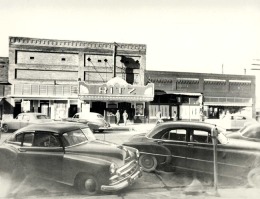 A contemporary photo of the Ritz Theater.

El Dorado had its own version of the Rialto. Located at 117 E. Cedar St., the Rialto opened in 1929 and closed in the early 1980s. It has since reopened for live shows. It was added to the National Register of Historic Places in 1986. 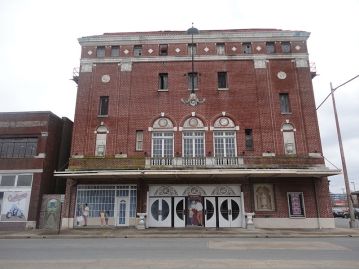 Nicknamed the “Showplace of the South,” the Saenger sat about 1,500 viewers. Inside was a balcony, marble floors, a large balcony and a chandelier comprised of crystal. Restoration efforts in the mid 1990s failed to generate interest in reopening the theater full-time.

Riverdale 10, 2600 Cantrell Rd. in Little Rock, circa 2008. The 10-screen cinema succeeded the iconic Razorback Drive-In. Built in the late 1990s, its original moniker was Razorback 10, but fears over licensing issues with the University of Arkansas thwarted those plans. Riverdale closed briefly in 2014, but reopened as a theater/cafe later that year.

Pulaski Theater, 324 W. Capitol Ave. in Little Rock, seen here during a parade in the 1940s. The theater’s vertical marquee — spelling out “Pulaski” — can be seen in the upper middle portion of the photo. The theater opened in the 1930s and eventually changed its name to Capitol Theater. It closed in the 1950s.

The Gem Theater, 117 W. Main St. in Heber Springs, as it looked in 2009. This version of the Gem opened in 1942, after a fire burned the original building to the ground. The theater is still showing movies and recently added 3D films to its repertoire.

A close-up of the Conway Theater’s marquee in 1961.

The Asher Drive-In switched adults only shows in the early 1980s. This photo is from 2003.

An artsy shot of the Asher Drive-In after it closed in the 1980s. When the drive-in switched to X-rated features, it garnered a seedy reputation. The theater, only a short drive from the 150, was razed to make way for University of Arkansas-Little Rock student housing. 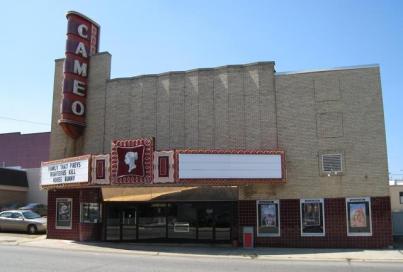 Once a palatial movie house, the Cameo Theater, 111 N. Jackson St. in Magnolia, has reportedly been split into a triplex. Other reports list the theater as open but only using one screen.

A view of the Capitol Theater, 600 Main St. in Little Rock, in 1958. The theater’s vertical marquee is in the upper right of the picture (look at the capitol and then pan to the right).

Cars form a long line while waiting to see a movie in this brochure advertising the Route 22 Drive-In, 3215 S. 74ht St. in Fort Smith.

The Route 22 Drive-In was estimated to fit about 550 cars.

For a state as small as Arkansas, its residents have been blessed over the years with an abundance of unique movie houses and drive-ins. This pictorial-essay highlights some of the more regal theaters that graced Arkansas’ down towns and roadsides from the roaring 1920s to the New Millennium.